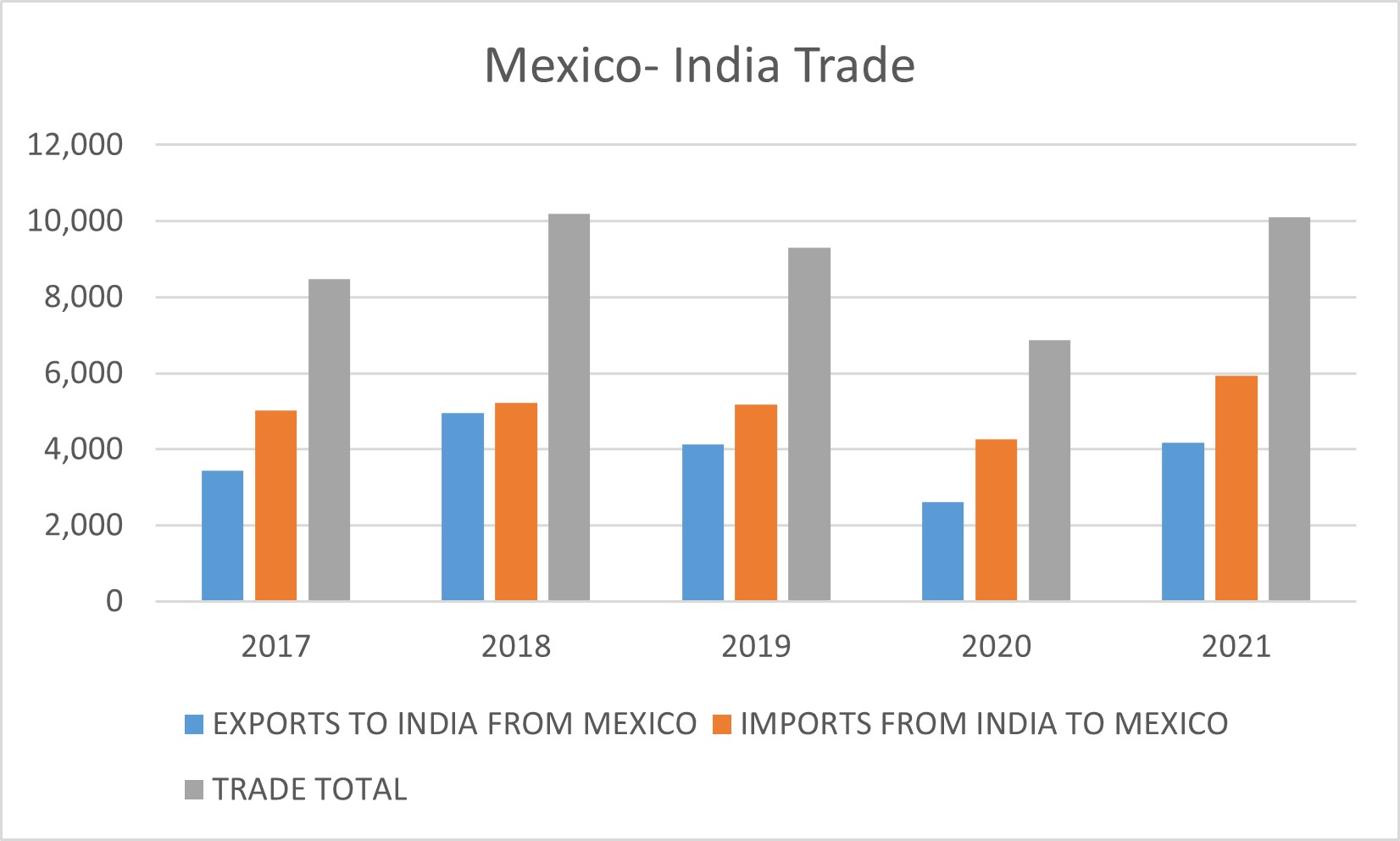 On the side of India

The most important product continues to be vehicles and auto parts since 2012, when it surpassed electric machinery.
In 2012, we exported 466 million dollars in merchandise, an amount that increased to 1,989 billion dollars in 2017, which meant an increase of 327%.In 2018, we only sold 1.7 billion dollars of these merchandise.India is the second largest supplier of motor vehicles and other transport vehicles for Mexico after the United States of America.However, in 2018, the market showed a 19% drop, resulting in total exports of 1.2 billion dollars.

In recent years, there have been some products that have found a new market, either in one or another country, among which ceramic products stand out.In 2015, India sold only $ 4.325 million in products to Mexico and was the 13th largest supplier to the Mexican market.Following the efforts of the Morbi Ceramics Association and the Commercial wing of the Embassy, the market for this Indian product expanded.By 2017, we were selling 92.66 million dollars of this merchandise and we had become the third largest supplier for this market.Exports contracted to 79.76 million dollars in 2018, but are in the process of recovery.

Another of these products has been footwear (including parts).Indian footwear exports reached $ 9.7 million in 2016 and India ranked eighth in the group of suppliers.Exports amounted to $ 35,103 million in 2018, increasing by 262% in 2 years.It should be mentioned that the Leather Industries Council (CLE) organized a Meeting of Buyers and Sellers in the leather center of Mexico, Len, Guanajuato, in November 2018, in 2021 CLE held a virtual B2B with Mexican counterparts and were companies like Flexi Shoes Mexico, were highly interested in what india has to offer in the leather and shoes sector.

The glass packaging market has steadily increased since at least 2013. In 2013, India exported this product worth 8 million dollars, which increased more than 100%, which means 20.5 million dollars in 2018While other business partners showed a contraction in this market, Indian participation rose continuously, showing changes in Mexican consumer preferences for the Indian product.The increase in labor costs in China is also a factor for this increase.H.U.T.It is a large Indian trading company established in Mexico that imports much of this product from India.Overall, under the category of glass and glassware products, Indian exports increased from $ 10 million in 2016 to $ 16.95 million in 2018, almost 70%.

Exports of pharmaceutical products, which suffered a market reduction in 2017 compared to 2016, showed a recovery in 2018. In 2016, we exported goods worth 95.94 million, which reduced to 77 million dollars in 2017, but expanded to 120 million dollars in 2018, showing an increase of 56% compared to the previous year. This may be a potential sector for India, imports to mexico continue to increase, FY-21 imports of pharma products were recorded at $212.44mn with growth of 32.81% compared to 2020.

On the Mexican side

Mexico has been an important supplier of crude oil for India.In fact, India is the third largest market for Mexican crude oil.Mexico exported 3.73 billion dollars of crude oil with an increase of 36% over the previous year.Mexico's export to India of this product has always been increasing, however, in terms of value, it shows a fluctuation due to international prices.In 2010, Mexico exported 8.36 million barrels, which continuously increased to 50.89 million barrels in 2017. Unfortunately, the Mexican export basket is not very diversified and 75% of the basket is occupied by crude oil.

However there are some notable products of the Mexican basket.For example, iron and steel exports from Mexico are recovering.The export was worth 10 million dollars in 2016, which increased to 24 million in 2018. Mexico also exported copper elements and concentrates worth 30.9 million dollars exploring a completely new market in this product.

One of the biggest drivers of trade between the two countries has been the constant flow of trade missions from India to Mexico. In recent years, Mexico has seen more than 300 Indian companies visit and explore the market almost every year. There has been a regular participation of Indian delegations in some of the most reputed exhibitions in Mexico, such as InterModa, Expo Ferretera, Expo Plastimagen and Expo CIHAC. The Embassy supports the commercial mission in every possible way. In addition, IIC, FICCI and TPCI have a cooperation agreement with IMBC.

in 2022, Plexconcil and members of the Plastics Industry participated in the EXPO- Plastimagen. During the visit of the Plastic Exports Promotion Council, in joint collaboration with IMBC both signed an MoU with Anipac.

From Mexico, the commercial wing has nominated and sent more than 30 entrepreneurs to various events and exhibitions in India. In addition, there have also been high-level delegations in several sectors. In February 2018, the Secretary of Energy of Mexico visited India and participated in Petrotech 2019.